My Most Recent Drawings

September 07, 2013
I was recently invited to provide some work for display in a show at Artists’ Mediums in Williston, VT. They have four shows per year, and the current show’s title is “Once Upon a Time”. Instead of just selecting some drawings I had already done, I took the title of the show as inspiration to create a series of three new drawings. I had the idea of combining the Three Little Pigs with the Three Bears of Goldilocks fame. Would the presence of the bears be enough to deter the big bad wolf from harassing the three little pigs at their new abodes? I’ll leave it to you to decide whether this would be the case. If so, would the wolf then take the bears’ absence at their own abode as an invitation to deal with Goldilocks as if she were Little Red Riding Hood?
The show runs through October. Be sure to stop in if you’re in the area. 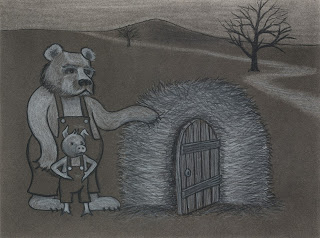 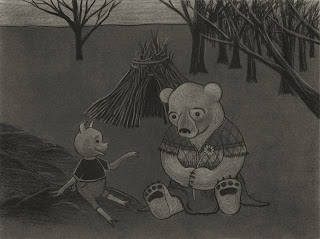 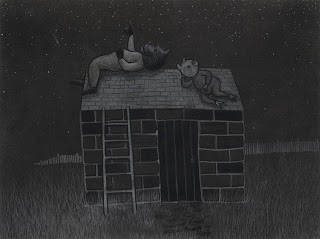 * Interestingly, the stories of The Three Little Pigs and The Three Bears are both British tales and both originally appeared in print in the 19th century. Little Red Riding Hood is much older and not British.

If I'm Destined to Get a Pulitzer Prize for 02008, This is the Line of Thought That Will Earn It For Me

I'm pretty sure that it's been at least two decades since the idea of The Bell Ringer Joke started knocking around in my head. (I've mentioned the joke in a previous blog post.) There has been hope and despair, laughter and great disappointment, spread out over more than half my lifetime!

On Thursday morning, out of the blue, I had a few epiphanies regarding the joke for all of these years.

Epiphany #1: The first and second parts of the joke are spectacular, and if I had not been told at the time that I first heard them that there was a mysterious third part floating about in the ether, those two known parts would have been deeply satisfying. There would have been no disappointment associated with The Bell Ringer Joke whatsoever. The two parts stand together as a complete and brilliant story, riotously funny. Which is to say that the third part is only relevant if yo…
Read more

February 16, 2015
I hardly ever do any posting to The Repeal of Gravity Blog nowadays. Mostly I do my online posting to my Facebook account, which is set up with privacy protections so that I'm sharing with my small group of friends and my somewhat larger but still pretty smallish group of Friends. Today I'm reposting something here that I posted there last week, simply because I want to make sure that it really is a public declaration. This is not my best piece of writing. It's not the most important thing I've ever said. It's not the thing that I would most want to be remembered for. I merely want to add my voice, unabashedly, to a righteous chorus [however small, however quiet]. What follows is that contribution.

Anyone with a working brain and any sense of the world knows that heinous terrorist acts committed in the name of Islam and/or Allah are not in any way representative of Muslims in general. Likewise, anyone who's been paying attention in the last 13.5…
Read more

August 26, 2013
I've finally set up a storefront, through Imagekind, where you can purchase prints of my charcoal drawings. See the snazzy banner to the right? Here's the direct link to the storefront's URL: