Showing posts from 2012
Show all

A Video Showing My Drawing Process

October 20, 2012
Eight days ago I launched my first Kickstarter campaign. It runs until November 2, 02012. I hope you'll consider helping, by backing the campaign or by spreading the word to your friends or both. I got an easy to remember URL for the campaign: http://tinyurl.com/kickstartercampaign Thanks for your consideration.
Post a Comment
Read more 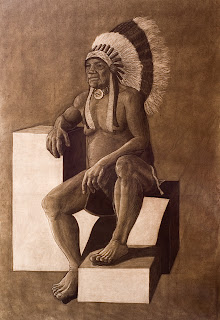 I received word yesterday evening that I have been selected to show a couple of drawings in the Juried Regional Exhibition at Newport's Library Arts Center . This is the second consecutive year in which I have been given this honor. The exhibition will open to the public on Friday, May 4, 02012. I am extremely excited about this opportunity. What thrills me even more is that I have been selected to participate in the 02013 Selections Exhibit at the same gallery. That's a group show that will include the work of just seven artists. In that show, we'll get to show more than just two works apiece. I have not gotten any details yet about how many pieces I'll be able to show or whether they have to be new works or who gets to decide which pieces are included. I'm sure all will be revealed in due time. For now, I'm just over the proverbial moon about having been chosen. It's something that I basically set for myself as a "lifetime goal" within the last
Post a Comment
Read more

January 15, 2012
“Before we marry the guy next door, don't you think we ought to have a fling with a tall dark stranger and see if he can support us in the manner to which we'd like to be accustomed? And if he can't, we can always marry the steady beau who lives next door.” —Richard Land, in an NPR piece that aired January 13th [Richard Land is the president of The Ethics & Religious Liberty Commission of the Southern Baptist Convention.] The quote above was made in an effort to explain the need for a meeting that was scheduled to happen this weekend. At that meeting, 150 influential religious Conservatives ended up deciding [on the third ballot] that Rick Santorum is the Republican candidate that they want to support, collectively, as the anti-Romney. I found it absolutely fascinating that Dr. Land chose the words he did in making his analogy. I was all set to send him a letter congratulating him for finally facing his own homosexual tendencies. I was all set to thank him for ta
1 comment
Read more
More posts